I’m teaching my nephews (four and six) to fight.

(watching children fight at that age is awesome… it’s all natural… the four year old has the ‘double hip’ when throwing the ‘one, two’, twisting, heel off ground and everything!)

People are saying “should you teach children to fight?”

Hell fucking yeah you should! Boys and girls… as early as possible. Hit back when hit… do not fucking take it from anyone!

And when the fucking snowflake, mincing cunt teacher says…

“It doesn’t matter who started it”

ALL THAT MATTERS IS WHO STARTED IT!

Who initiated the violence? Who defended themselves?

The Natural Law principle of Self Defence!

Every human being on this planet has the natural right to defend themselves when violence is initiated upon them! NATURAL FUCKING LAW! The law of creation.

Should you teach your kids to hit back? 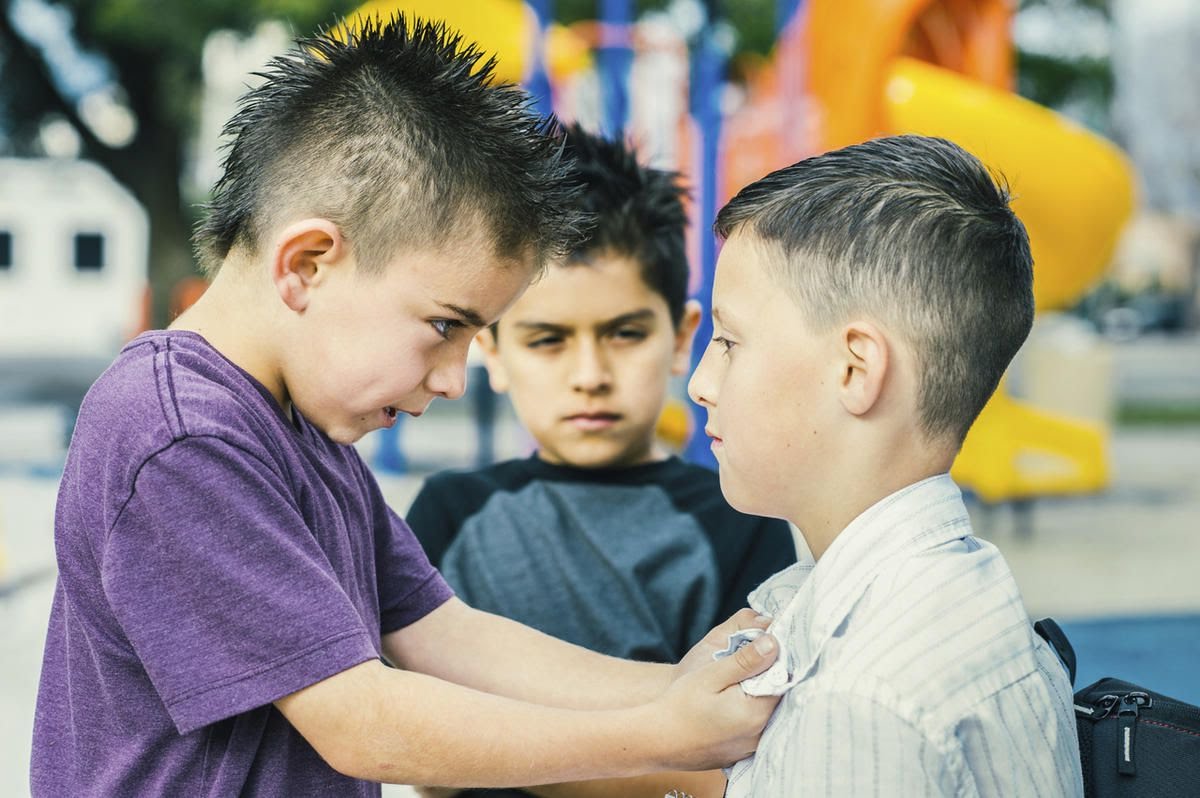 A psychologist recently wrote parents should teach their children to fight back when they are bullied, which has Erin Stewart wondering what is right. Andrew Manley, istockphoto.com

If your child comes home from school and tells you that another child has pushed or tripped or even hit him or her, what do you say?

An Irish clinical psychologist is raising eyebrows with his advice to parents in this moment: Tell your kids to hit back.

Psychologist David Coleman suggests parents make unwitting victims of their children when they discourage the biological instinct to fight back against an aggressor. A child is less likely to be pushed, punched, kicked or physically bullied again if he or she fights back the first time, he says.

My gut reaction to this study was immediate disagreement. I am a huge advocate of “violence is never the answer” and have been using phrases such as “use your words, not your hands” since my daughters were toddlers and first took a whack at the playmate who swiped a toy.

I’ve even gone so far as to tell my kids that they should never hit, even if someone hits them first.

The mantra to talk it out rather than fight it out is common among parents who want to encourage children to reason with each other instead of resorting to violence. But I also don’t want my kids to be victims who never stand up for themselves, and I definitely don’t want bullies to think they can just run the playground with an iron fist.

“I don’t want my child to be aggressive or domineering, but I do want them to show that they are not willing to let anyone push them around,” Coleman writes.

Then the question is, where’s the line? Not every situation warrants a physical retaliation, and I worry that many kids won’t know when it’s appropriate to fight back and when they are actually being the aggressor.

So I’m not ready to give up on the “try to talk it out” mentality just yet. Words can have power, too, and I’d much rather raise children who can assert themselves verbally before they resort to their right hook.

But this psychologist does have me rethinking the idea that if someone physically harms my child, she should have the right to defend herself.

I want to empower my child, not turn her into a victim who thinks she’s a bad girl if she stands up for herself. All my talks about kindness and turning the other cheek are meant to embolden her, not cripple her.

Because really, that’s the whole point of bullying: to make someone feel helpless and hopeless and useless. So while I hope my children never have to resort to violence, perhaps this psychologist is right: The bullies win when we teach our kids not to fight back.

Erin Stewart is a regular blogger for Deseret News. From stretch marks to the latest news for moms, she discusses it all while her 9-year-old and 6-year-old daughters dive-bomb off the couch behind her.