Some people in the UK know who I’m training with, serious guy when it comes to Self Defence.

This is one of the most fascinating documentaries I’ve seen in a while. Sometimes funny, often quite disturbing… To the quite sad and upsetting story of Xu Xiaodong, a mediocre Chinese MMA fighter, who is now being gang stalked by the Chinese people (all of them?) for kicking the living fuck out of a number of Kung Fu ‘Masters’.

What leads people to believe in “chi” attacks and “no-touch” knockouts?

Outside of traditional martial arts lies a strange world where energy attacks and “no-touch” knockouts replace punches and kicks.

You can get a glimpse of it through YouTube videos showing fights that more closely resemble “Dragon Ball Z” than real-life combat. Take, for example, practitioners of the Balinese martial art Yellow Bamboo, who believe they can blast their opponents with God-charged beams of “chi” (it doesn’t fare well against non-believers). Or George Dillman, the “no-touch” master who seems to have convinced dozens of his students that he could knock down — and even knock out — opponents without touching them.

And then there’s Yanagi Ryuken, a Japanese man who claims to have psychic abilities, and has been described as a master of Daito Ryu Aikido. Here he is deftly defeating a flock of his students.

In 2006, Ryuken, who was 65 at the time, accepted a challenge match against 35-year-old Iwakura Tsuyoshi, a Japanese journalist and mixed martial artist. Here’s what happened: 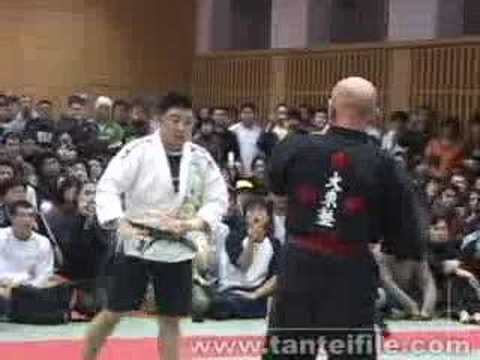 Ryuken said he lost because his psychic abilities were temporarily weakened due to illness. It’s impossible to know whether Ryuken’s faith in his own psychic abilities was pummelled that day, but he reportedly continued to train students in his special style.

In any case, it’s a brutal sight. It also highlights the darker, not-so-funny side of fake martial arts: people looking to defend themselves are being sold shoddy techniques that fail in real-world fights.

Why do people buy into fake martial arts?

In a recent video essay, YouTuber Super Eyepatch Wolf explores that question by taking a look at the history of fake martial arts, and some of its noted “masters.” 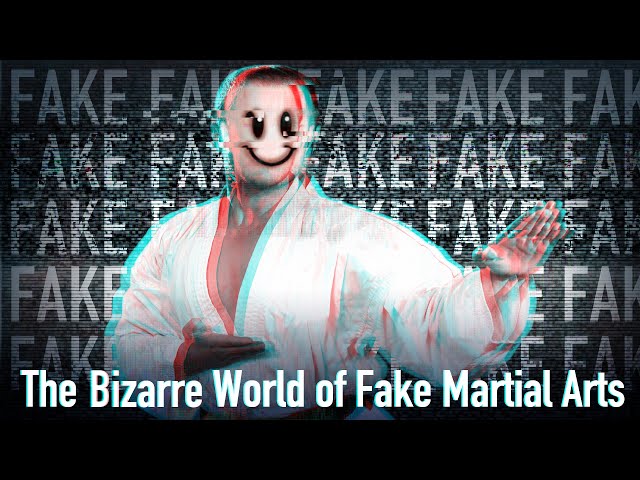 The 30-minute video is well worth a watch. If nothing else, check out the last segment, which outlines the story of Xu Xiaodong, a Chinese mixed martial artist who’s spent years challenging and defeating fake martial arts teachers. In response, the Chinese government lowered his “social credit” score.

Super Eyepatch Wolf notes that fake martial arts groups are similar to cults, in that both promise “simple human comfort” and protection from fear. In the case of martial arts, that fear is physical violence from others.

“This was the same psychological manipulation that let Charles Manson control his followers, making them act in strange, bizarre ways, and even commit murder,” Wolf says, noting that the same promise of comfort and community also enabled members of the Heaven’s Gate cult to commit mass suicide.

Similar to cult leaders and “no touch” masters are so-called “faith healers,” like Benny Hinn. With all three, Wolf notes, the formula boils down to: “Put all your faith into this one individual, and they will give you the means to guard yourself from the evils of this world.”

“…there’s a tremendous amount of comfort in that, the idea that these people can teach you techniques that will make you immune from physical danger, creating an illusion so strong, it’s led to these kinds of footage we’ve been looking at…”

But what about traditional martial arts? Might a similar, yet subtler, form of self-deception about the true strength of students’ or teachers’ abilities also occur in, say, karate or Wing Chun dojos?

In a 2012 blog post, neuroscientist and author Sam Harris suggests two ways that mainstream martial artists come to delude themselves regarding their abilities. One is that training occurs in a controlled, predictable environment, and so learned techniques can become a “mere pantomime of combat that does little to prepare a person for real encounters with violence.” Also, some techniques are too dangerous to perform in a dojo, so practitioners just assume that they’d be effective in a real fight, even though “reports from the real world suggest otherwise.”

An even deeper dive into self-delusion in the martial arts comes from a 2010 paper written by Gillian Russell, a philosophy professor at the University of North Carolina at Chapel Hill. Russell’s key argument is that martial arts tend to encourage “epistemic viciousness,” which she defines as the “the possession of vices that make one bad at acquiring true beliefs, or give one a tendency to form false ones.”

To summarize, Russell describes several factors that might encourage bad beliefs among martial artists, including:

Of course, traditional martial arts can provide people with real self-defense skills, discipline, and a sense of aesthetic beauty and community. But martial arts also illustrate how blind spots can cloud judgement. After all, the physical, mental and emotional stakes are high in martial arts, not to mention that martial artists invest tons of time and money into training.

Altogether, these conditions may make people more vulnerable to cognitive biases: Practitioners want to believe what they’re doing is effective, that they’ll be protected from outside threats, and that their community is on the right path, even if evidence says otherwise.

Obviously, blind spots aren’t limited to martial arts. As Russell notes, you can see similar phenomena in a parent who thinks her kid is an unrecognized genius, or in spouses who wildly overestimate how attractive strangers would rate their husband or wife.

“The last case, in particular, might tempt us to think that some epistemic vices are sort of cute. But it would be stupid to believe that epistemic vice is acceptable in the martial arts, since this is an area where it is morally important to have true beliefs, and not just cute ones,” Russell writes. “The question of whether you can stop a train with your ki, or whether a stretch will be detrimental to your students’ health, or whether a technique could kill someone—these are not questions on which you should want to be endearingly mistaken.”