“The Chinese developed ‘SARS and ‘MERS’ 😷… The Israelis developed ‘MEHS’… 🤷 (not so contagious, early symptoms include not giving a fuck) 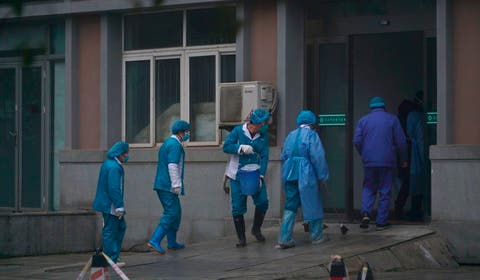 5′ Hospital staff wash the emergency entrance of Wuhan Medical Treatment Center, where some infected with a new virus are being treated, in Wuhan, China, Wednesday, Jan. 22, 2020. The number of cases of a new coronavirus from Wuhan has risen … more >

The deadly animal-borne coronavirus spreading globally may have originated in a laboratory in the city of Wuhan linked to China’s covert biological weapons program, said an Israeli biological warfare analyst.

“Certain laboratories in the institute have probably been engaged, in terms of research and development, in Chinese [biological weapons], at least collaterally, yet not as a principal facility of the Chinese BW alignment,” Mr. Shoham told The Washington Times.

Work on biological weapons is conducted as part of dual civilian-military research and is “definitely covert,” he said in an email.

Mr. Shoham holds a doctorate in medical microbiology. From 1970 to 1991, he was a senior analyst with Israeli military intelligence for biological and chemical warfare in the Middle East and worldwide. He held the rank of lieutenant colonel.

A Chinese Embassy spokesman did not return an email seeking comment.

Chinese authorities said they do not know the origin of the coronavirus, which has killed at least 80 and infected thousands.

Gao Fu, director of the Chinese Center for Disease Control and Prevention, told state-controlled media that initial signs indicated the virus originated from wild animals sold at a seafood market in Wuhan.