“Did someone or a group foresee the execution of top general of Iran?”… Uri Geller? 😆😂🤣

$190 million in profit—on paper anyway—for whomever, or group of whomevers, was clever enough or lucky enough or informed enough about the impending bombshell news out of the Pentagon that the important Iranian leader had been killed.

(maybe it was Le Chiffre)

The Mystery of the Trump Chaos Trades, Iran/Mar-a-Lago Edition

Back in July, when I first wrote about suspicious trading in a futures contract tied to the performance of the S&P 500 index, there was nary a peep. Maybe everyone was at the beach? Then, in October, I wrote a second story about the trading in these same futures contracts, known as e-minis, and about how it sure seemed like some people who were placing the bets on them at the Chicago Mercantile Exchange were benefitting from exquisite timing, (or something more nefarious) putting themselves in a position to reap millions of dollars in profit, assuming they sold when their future contracts were in the money.

This time, the crowd went wild. My tweet about the story garnered nearly 1 million “impressions” and more than 100,000 “total engagements,” which for someone with around 11,000 followers seemed pretty remarkable. Two congressmen asked the FBI, the Securities and Exchange Commission, and the Commodity Futures Trading Commission to investigate the suspicious trading; a group of Democratic senators also asked for an investigation. Predictably, the CEO of Chicago Mercantile Exchange said there was nothing suspicious going on. These were not the droids you were looking for. There were a bunch of critics, eager to bat down the story. And then Bloomberg reported that the investigators found nothing suspicious either. But my sources remained convinced that the trades were suspect.

Then came the U.S. drone strike that killed Qasem Soleimani at around 1 a.m. local time in Baghdad on Friday, January 3. That was around 5 p.m. in Washington. It took the Pentagon another five hours or so—just before 10 p.m.—before it released its official statement telling the world that Soleimani had been killed. E-minis stop trading on the CME atabout 4 p.m. New York time (3 p.m. Chicago time) each day. There is then an hour of what’s known as aftermarket trading. Then there is a one-hour break in trading. Night trading in E-minis begins at 6 p.m. New York time, hours before the Pentagon made its official announcement about Soleimani’s killing. For the first two and a half hours of the night trading on January 2, the volume in the E-mini market was around 1,000 contracts every 10 minutes, according to the trading records from that night made available to me. Nothing particularly remarkable.

But then, around 8:30 p.m. ET, or still some 90 minutes before the Pentagon made its announcement, trading picked up considerably. The S&P 500 index was then at 3260. Suddenly, a trader or group of traders—but most likely not a single trade or trader—began making big bets that the S&P index would fall by selling the March 2020 E-mini futures contract. At 8:30 p.m. ET, 2,250 E-mini contracts were sold; at 8:40 p.m. ET, 5,790 E-mini contracts were sold; 10 minutes later, 7,113 E-mini contracts were sold. In sum, in the 70 minutes between 8:30 p.m. ET and 9:40 p.m. ET, 76,000 E-mini contracts were sold. By then, the S&P 500 index had dropped to 3236. After the attack was announced, the S&P 500 index dropped to 3206, a drop of around 50 points. A 50-point drop in the index generates a profit of $2,500 per contract, assuming those contracts were sold short, which in this case they were. 76,000 contracts sold short, at a gain of around $2,500 per contract, equals some $190 million in profit—on paper anyway—for whomever, or group of whomevers, was clever enough or lucky enough or informed enough about the impending bombshell news out of the Pentagon that the important Iranian leader had been killed. “Did someone or a group foresee the execution of top general of Iran?” an E-mini trader wondered in an email sent to me the other day. “…When volume goes from 1,000 every 10 minutes and jumps to as high as almost 17,000 in 10 minutes, something is going on.”

For whatever reason, the Twitterverse had already seemed highly attuned to suspicious trading in defense stocks after the Trump New Year’s Eve party at Mar-a-Lago, on December 31—where Trump told people days prior to the strike, according to the Daily Beast, that he was working on a “big” response to Iran provocations and “soon”—but before the Soleimani hit, which was after the stock markets had closed on January 2, the first full-day of trading of the New Year. Maybe it was a coincidence that many of the defense stocks rose on January 2. (There’d also been the rocket attack in Iraq, killing an American contractor, America’s retaliation, which killed 25 Iraqi militia fighters, and then the attack on the U.S. embassy in Baghdad.)

Dean Baker, an economist and the cofounder of the Center for Economic and Policy Research, in Washington, tweeted that it was “very interesting” that Lockheed Martin’s stock went up 2% on January 2. “Looks like a lot of people should go to jail,” he wrote. Bill Corbett, who describes himself on Twitter as an “unapologetic Masshole,” tweeted that it wasn’t just Lockheed’s stock that went up either. He noted that the stocks of General Dynamics, Boeing, and Raytheon—big defense contractors all—also “began to spike” after the Mar-a-Lago New Year’s party and before the killing. Jonathan Alter, the MSNBC regular and author, tweeted “If the SEC hasn’t been totally politicized (a big If), it shouldn’t be hard to match the Mar-a-Lago guests who heard Trump say to expect something big and their investments.”

When you write a story that suggests that people may have had access to advance knowledge of momentous events and then managed to make huge amounts of money trading on that information, you get a lot of criticism. You also hear from people around the world who see the same kind of things happening and wonder why. After the Soleimani killing, I heard from Fergus Herries, who works in Hong Kong in financial-sector public relations. Like Baker and Corbett, he noticed the unusual trading in the stocks of Raytheon and Lockheed Martin in the hours before the drone strike in Baghdad and wondered why their stocks began to “surge” an hour before the hit. “If it is insider trading it would be fairly gobsmacking,” he wrote, “not to mention brazen, and while the implications of your previous [V.F.] article are egregious, behaviour like this involving assassination and the prospect of armed conflict is on another level altogether.”

Couldn’t have said it better myself.

Sens. Elizabeth Warren, D-Mass., and Chris Van Hollen, D-Md., urged an insider trading investigation into President Donald Trump for reportedly telling Mar-a-Lago guests about the Soleimani strike in advance, according to a joint letter sent to the chairmen of the Securities and Exchange Commission and the Commodity Futures Trading Commission on Monday.

The request comes after a report in The Daily Beast that Trump told guests at his resort up to five days before the Jan. 3 strike against Qasem Soleimani, the commander of Iran’s Quds Force, to expect a “big” response to Iran that they would be hearing or reading about “soon.”

Why it matters: Van Hollen, the ranking member of the Senate subcommittee that oversees securities, and presidential contender Warren said that, if true, the report “raises a number of troubling national security questions,” including the president’s mishandling of sensitive national security information and his providing “market-moving” material of trade defense industry stocks and commodities.

Mar-a-Lago includes nearly 500 paying members, according to the request, including dozens of real estate developers, Wall Street financiers, energy executives and others whose “businesses could be affected by Mr. Trump’s policies.” The letter highlighted stock prices of Northrop Grumman, Lockheed Martin and Raytheon increasing between the days before and immediately after the attack.

What’s next: The senators asked the agencies to provide a briefing on the request no later than Feb. 13. The request comes amid an ongoing impeachment trial against the president and criticism of what intelligence information led to his decision to kill the Iranian general. 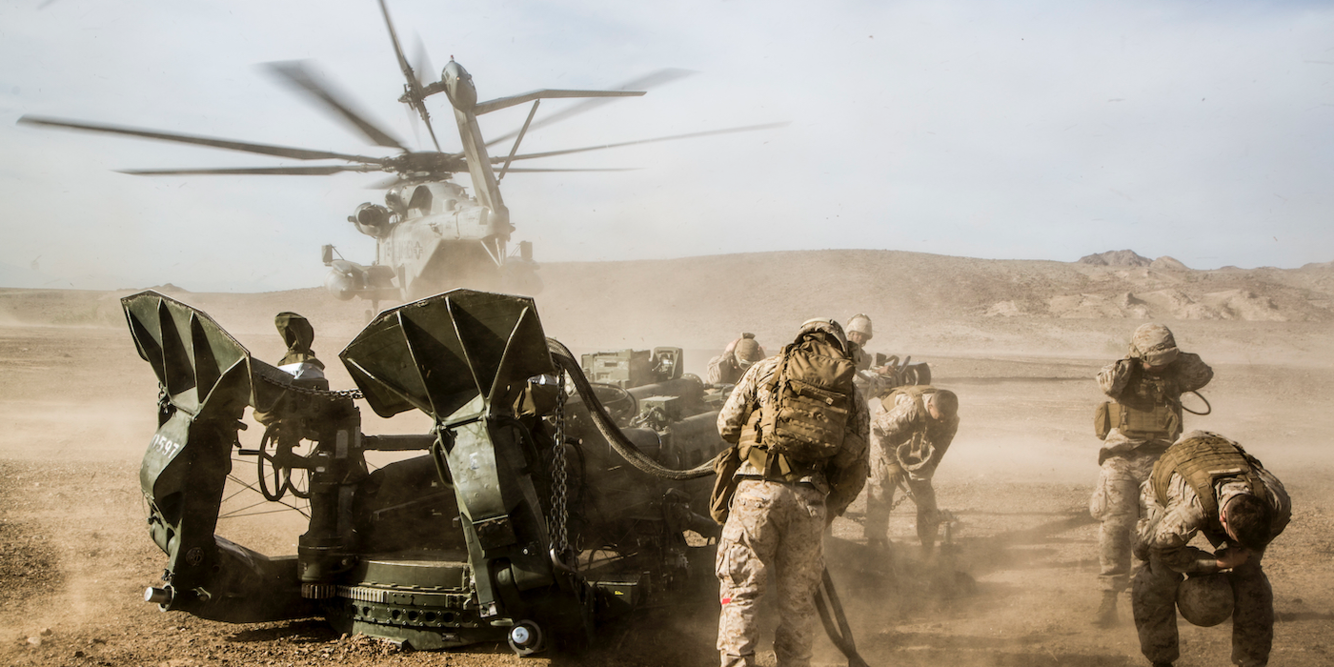 Aerospace and defense companies are among the few groups of stocks rising in Friday trading, with escalating tensions between the US and Iran boosting the war-driven industries.

The S&P 500 Aerospace & Defense Industry Index climbed as much as 1.5%, while major indexes slid roughly 1% at their intraday lows.

A US airstrike killed top Iranian general Qassem Soleimani on Thursday, leading global stocks to drop while gold and oil spiked. The attack came “at the direction of” President Trump, according to the Defense Department, and was meant to deter “future Iranian attack plans.”

Iranian officials quickly responded to the strike, with the nation’s supreme leader warning “harsh retaliation is waiting” for the US.

“Trump through his gamble has dragged the US into the most dangerous situation in the region,” a senior advisor to Iranian President Hassan Rouhani said. “Whoever put his foot beyond the red line should be ready to face its consequences.”

All three major US stock indexes are down as traders flee the volatile market, but a select few firms are surging on the heightened chance of armed conflict between the US and Iran.

Here are the seven major defense and aerospace stocks rising in Friday trading, ranked in ascending order of intraday performance. 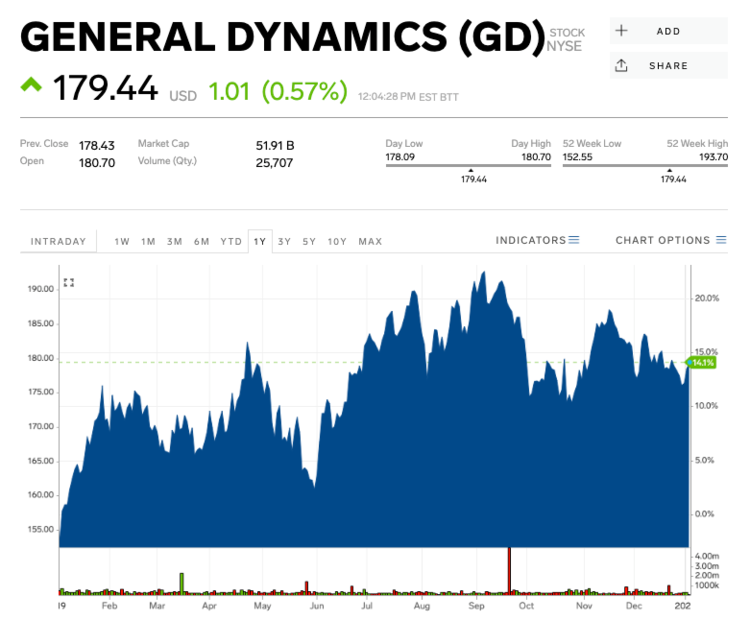 Intraday performance: up as much as 0.8% 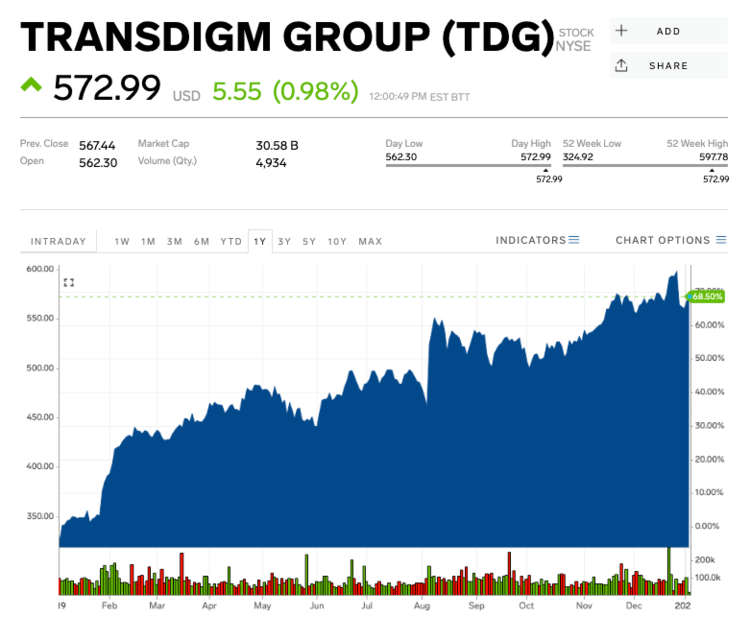 Intraday performance: up as much as 1.1% 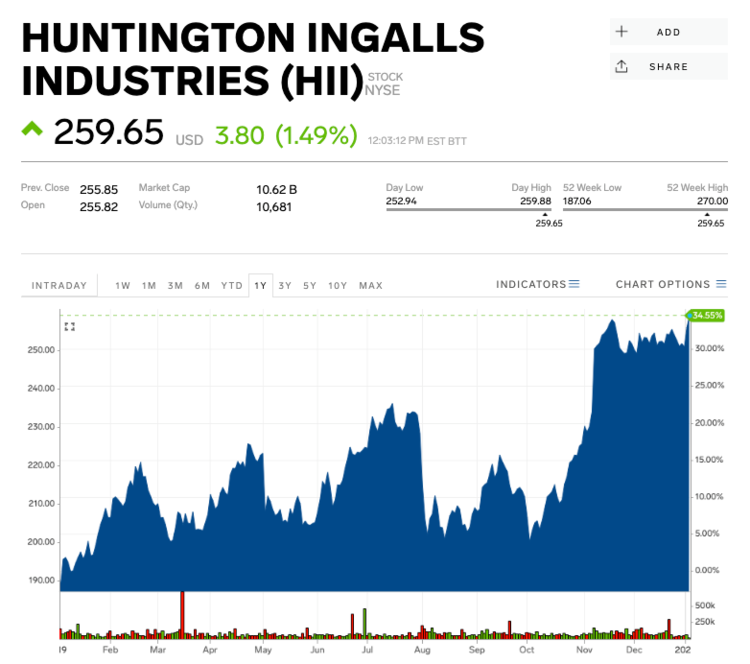 Intraday performance: up as much as 1.6% 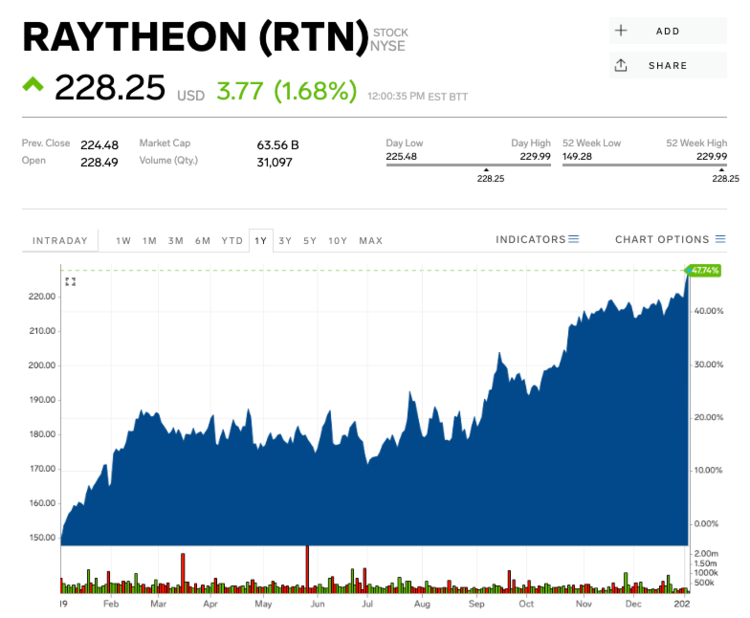 Intraday performance: up as much as 2.4%

Intraday performance: up as much as 3.6% 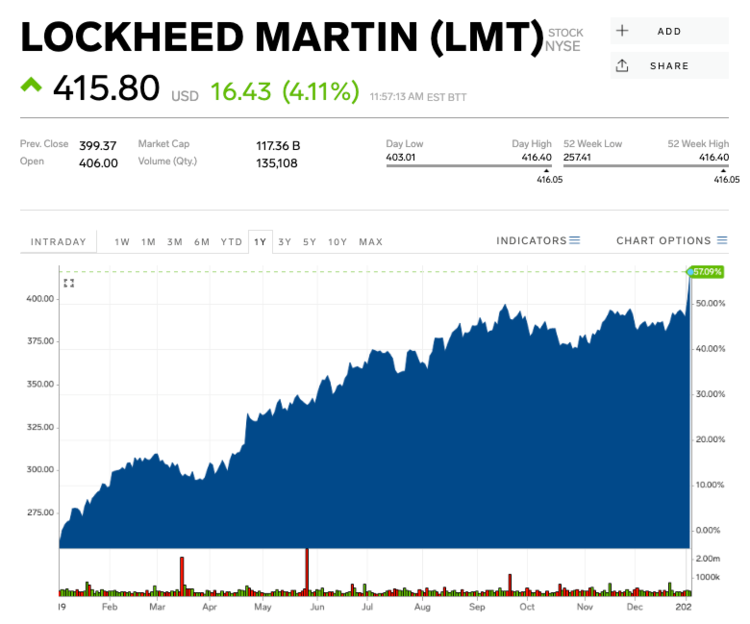 Intraday performance: up as much as 4.2%

Intraday performance: up as much as 5.5%

‘Likely just the beginning’: Here’s what 6 experts are saying about what Trump’s deadly Iran strike means for already-shaken markets